First step download install JRuby. You can get it at:

After pulling down the tarball,

, I unpacked it and installed at:

Next, add the environment variable

since I’m running the bash shell by default on Mac OS X:

Since I don’t want to take out my normal Ruby C install I just export it in front of the path just for this terminal session:

Double check that JRuby is setup:

Test With A Simple JRuby App

Go ahead and setup a directory for your JRuby apps:

The last step assumes your using textmate. You can replace it with any

or any other editor you want.

Write a small JRuby app and save it:

Go ahead and run the simple ruby script and test the java integration of JRuby:

This should take about a minute. There are lots of notes on how ri and Rdoc take a long time to run right now, but it wasn’t too bad, about 5 minutes on a duo core Macbook Pro, but you can keep the two switches and save a little time.

The next step is a bit odd. For some reason the rails and rake files don’t get installed as executable. You have to make them executable and then pick up the changes using the bash

Then create your test rails app in JRuby. I used that idea of a book store application:

Go ahead and do a smoke test by booking up the server.

Should see a default rails page at

to add jdbc as an adapter type. The code goes just above

Get the MYSQL JDBC driver at:

I grabbed the file

and added it to my

. You can also add it to your

Start your MySQL server if it isn’t running. I just do this from the MySQL Preferences pane. 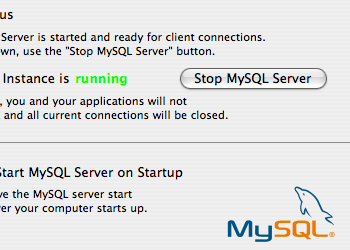 Time to setup the databases:

Go back to the rails app and create a model for Books.

Create a simplistic migration script in the file

Then create the scaffolding for Book:

Go to the URL and see the scaffolding using JDBC:

You should be able to run the rake command and run all the tests now. Instead you get an error about like this:

Turns out this is due to some hard coded values in the rails rake tasks. It has an easy fix by way of Ola Bini:

This pulls down a file

that I could only find in the subversion repository for now. Copy that file to the bookstore lib/tasks directory:

Time to run all the default tests with rake:

All the tests pass!

to include jdbc adapters for test and production:

Go ahead and run the migration for production as well:

This may take a few minutes the first time, but it appears to be much faster in subsequent builds.

At this point you just need to drop the mysql JDBC driver in TOMCAT’s lib directory at:

Copy the bookstore.war file to

Goto the app at:

Now do your happy dance! Or maybe just take a break and grab a soda.

I got this recipe for deployment together from several sources: