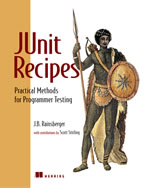 Apparently JB’s entry on Wikipedia is up for deletion. He comments on the whole process of the debate around his deletion as:

The whole experience makes me feel like I’m in a room with people talking about me while not acknowledging my presence and not seeming to care what I think about that.

I can’t even believe there’s a debate around it. JB has obviously contributed much to unit testing, TDD, XP, and Agile in general. His book, JUnit Recipes, I still use as a reference when I run into a nasty testing problem. I re-read sections on testing EJBs just a few days ago and it was better than anything you can find by just googling around. He’s hosted workshops at XP conferences, run XP days, written a popular JUnit tutorial. I still love his post on BDD:

What is Behavior-Driven Development (BDD)?

It is Test-Driven Development (TDD) practiced correctly; nothing more.

For all that work he really doesn’t deserve this sort of treatment.